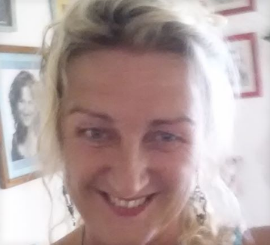 Angela Power-Disney has a unique insider perspective of MK Ultra trauma-based mind control connected with the British Military and was recruited against her will as a super spy.

Angela Power-Disney is an Anglo-Irish Mother and Grandmother, an MK Ultra and abuse survivor, activist, a vlogger, lobbyist, who has been living in rural Ireland on and off for 30 years, a world-traveller who’s moved around almost 50 homes including within seven countries and three continents.

She comes from a story-telling tradition and she eloquently describes her background and how she came out to speak against her abuse and conditioning at the hands of her family and associates and opens up about the world of spies and the elite underworld.

Angela is a survivor/overcomer of child sexual abuse, and has seen how corrupt the system is from the inside. She’s a vocal activist against child trafficking, illegal state enforced adoptions and is an expert child activist flying the flagship in support of the children of the infamous Hampstead Satanic Ritual Abuse and Infanticide and has scathing opinions of the elite paedophile stained families around the UK. Angela is frank about her trauma which has been off the charts particularly since she returned to work online and at protests vigils court cases etc in the field of ending child abuse and specifically in covering the Hampstead case.

“I call myself a reluctant monarch and illuminati asset who has defected and is ongoingly disclosing ….I have had diagnosis along the way of borderline personality disorder, Dissociative identity disorder and ADHD. I am a publisher writer and journalist tho was on what I call extended maternity leave for 30 years raising my children mostly on my own. I am a radical non religious Christian and a scholar of eschatology or end times……I am a bit of a comedian seeing absurdity in life on many levels . I have worked extensively wifh children and vulnerable adolescents ….also working in high places so to speak such as cia funded merchant bank, social secretary and personal assistant work with politicians and aristocracy, ghost writing for royalty etc ….all info gathering roles though I was MK unaware at the time….

I was one of the lead campaigners in the fight to expose the Hampstead Cover Up and somewhat the public face of the campaign and as such have been subjected to a vicious and sustained smear campaign by nefarious forces including the father and operatives centred at hoax stead.” she said.

Survivors worldwide have been disclosing to Angela for years including some in America who were instrumental in getting MKUltra exposed over there ….they would tell her about being abused hunted etc by people like George Bush, Pat Robertson etc and back then her mind could not process it or even digest it as she was still programmed. De-programming escalated for Angela under anasthetic in 2 major surgeries in 2014 and also because her children were showing similar symptoms of suppressed trauma with memory gaps etc

Angela volunteered and trained for several years with Werner Erhard aka Jack Rosenberg ‘s ‘human development movement EST then called THE FORUM now called LANDMARK INSTITUTE ….one course she was in also had ex Australian Prime Minister the late Bob Hawke’s daughter in it who she is on Angela’s friends list now though a silent observer mostly. Angela has done a lot of research into brain pathway diversions, artificially created genius and demonic attachments ….there are spiritual as well as practical solutions to these horrendous issues. Werner Erhard was part of the council of 9 fallen angel channeling fiasco and sadly was part of the infiltration as are many big Christian televangelists.